Dramatic Mezzo, Denise Seyhan always dreamed of emulating her great idol, the Italian Mezzo icon Fiorenza Cossotto. Denise’s mature voice has been characterized warm and sparkling in all ranges and has a unique timbre. Growing up in Wipperfürth, Germany, known for their elaborate Carnival celebration, the German-Turkish Mezzo loves spreading the cheerful nature of the Rheinland.

In 2004, she graduated in classical vocal studies at Musikhochschule Karlsruhe, and continued private studies with Gabriele Kniesel (Musikhochschule Freiburg). Denise spent a few years as a soprano, making her first debuts on the opera stage in the roles of Pamina and First Lady as an ensemble member of the Junge Kammeroper Köln. After changing back to the Mezzo Fach in 2006, she got her first engagement in 2008 as a mezzo singing Dorabella in Così fan tutte of Pasinger Fabrik. Shortly after, she sang Hänsel  and Maria Bellacanta (Hexe Hillary geht in die Oper) at Junge Kammeroper Köln.

Since 2009 until 2017, Denise focused her training in the Italian Bel Canto technique with the baritone Walter Donati and his wife, the italian Soprano Anna Rita Esposito, which developed her voice into a more dramatic repertoire.

Under the musical leadership of Johannes Witt she sang the Knusperhexe at the Rheinische Kammeroper in 2009 and 2010. In winter 2013, she was invited to sing the female lead part in the world premiere of the opera Konrad oder Das Kind aus der Konservenbüchse by Gisbert Näther at the Musiktheater Gelsenkirchen. After that successful production, she was again engaged in spring 2014 to sing the first recording of Georg Pelecis’ composition In Honour of Henry Purcell for chamber orchestra and three counter-tenors. During May 2014 she sang the roles of Sorceress and Second Witch of Dido and Aeneas by Henry Purcell in an operatic concert in Kaiserslautern. In 2015, she performed 3rd Woodsprite of Dvorak’s opera Rusalka at the Stadttheater Pforzheim. During 2016, she was acting as Birsen Güner in Gegen die Wand, an opera composed by Ludger Vollmer, at the Stadttheater Gießen. In summer 2017, she has made her debut as Ulrica in Un ballo in maschera by Verdi staged by the Kammeroper Frankfurt. Moving more to the Dramatic Mezzo-Soprano Fach, she sang Amneris and Fricka (Walkyrie) in Munich in 2018 and also Maddalena in Rigoletto. At the Stadttheater Heidelberg she performed the role of Dora K. in Benjamin by Peter Ruzicka. In the world premier of the chamber opera Durst by Robert Jíša at Tanzquartier Wien (TQW) she will interpret the part of the Alto.

„Working with Denise Seyhan has always been a great pleasure. She’s an outstanding singer and an excellent actress“, Elias Grandy, GMD, Theater and Orchester Heidelberg

„Honestly I loved how you changed in just 10min of thinking in new ideas! This is so good and not so usual! Well done dear brava!!“, Ricardo Estrada, Conductor

In 2018, she strengthened her stagecraft in a workshop focusing on the Chekhov acting method by Mario Andersen. She further refined these skills with directors like Gabriele Wiesmüller, Ulla Theissen, Kristina Wuss, Cathérine Miville, Bettina Lell, Ingo Kerkhof and Sascha von Donat, the acclaimed actress Hergard Engert, and the actor Paul Hänel.

„It was such a pleasure to work with you! You absolutely have the voice for Santuzza!“, Alexia Voulgaridou, Operasinger

Apart from her operatic career she appears at concerts venues in Germany and abroad. During summer of 2012, she was singing the alto-part of Beethoven’s Symphony No. 9 at the Reims Cathedral/France. 2010, she went on tour with the Westsächsische Symphonieorchester in Quintana Roo, Mexico. Compositions like Händel’s Messiah, Stabat Mater by Pergolesi and by Dvořák, and Mendelssohn-     Bartholdy’s Paulus have further enriched her repertoire. A Future release of the Liebesliederwalzer by Brahms is planned with Naxos Records.

In collaboration with pianist and moderator Heike Bleckmann, she has been performing various Lied recitals and themed concerts since 2011.

She discovered her passion for producing classical music videos in 2020 and created her own showreel highlighting the many facets of her personality and work.

Since 2002 she has been working dedicatedly as a Vocal Coach in Classic, Pop, Rock and Musical. Her Italian Bel Canto technique provides a sound basis for various musical styles and helps amateurs to develop a healthy, solid and clean singing technique.

Besides singing, she is passionate about visual arts, especially painting and silent movies. She loves keeping herself fit with jogging and yoga. 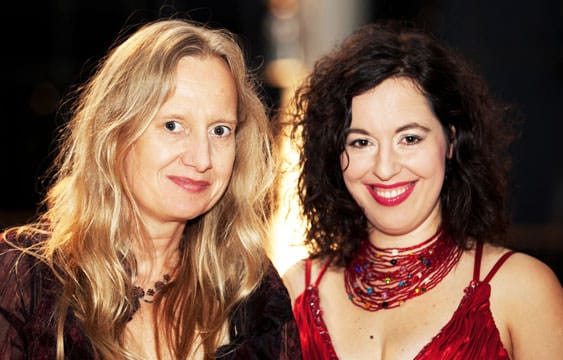 Together with the pianist Heike Bleckmann, Denise Seyhan sings diverse recitals. In 2011, the two musicians met each other on a benefice gala, and decided to work together as duo partners afterwards. Heike Bleckmann was born in Wesel, and studied at the Hochschule für Musik in Karlsruhe. After she has finished her studies with a diploma in major piano, she continued her musical education in the U.S.A. with Menahem Pressler, which was funded by a scholarship of the Adamant Music School. She attended numerous masterclasses by Edith Picht-Axenfeld, Vlado Perlemuter, Helena Costa, and Bernard Roberts.

The pianist performs a wide range of concert activities, both as a soloist, and also as a chamber musician with several ensembles, e.g. the „12 pianists“. But most of all, she marvellously accompanies Lied recitals. Her activities concentrate on organizing and performing thematic concerts with lectured recitals, and concerts. As a soloist and a duo partner of Denise Seyhan, she ascertains, thereby, a connection between literature, history, and music. One of her main interests are the life and works of female composers.